Thank you to everyone that came out to our last event, ‘Epilogue’, on April 19th, 2015. We were thrilled to finish off gritLIT (Hamilton’s Readers and Writers Festival) with a packed house at the Art Gallery of Hamilton and five amazing storytellers.

Our wonderful hosts for the night were Audrey Leduc and Troy Palmer.

They got the night started (and the crowd laughing) with a story about the awkwardness of running into people after you’ve already said goodbye. 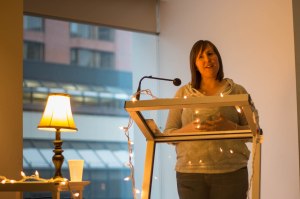 Steel City Story’s own Deborah Grace was the first storyteller of the night. This anxious extrovert and new mom kept everyone laughing with stories about her late mother, a quiet woman with a (very) loud family.

Watch out for Deb, she’s also a writer and is on her way to creating the next Gilmore Girls. 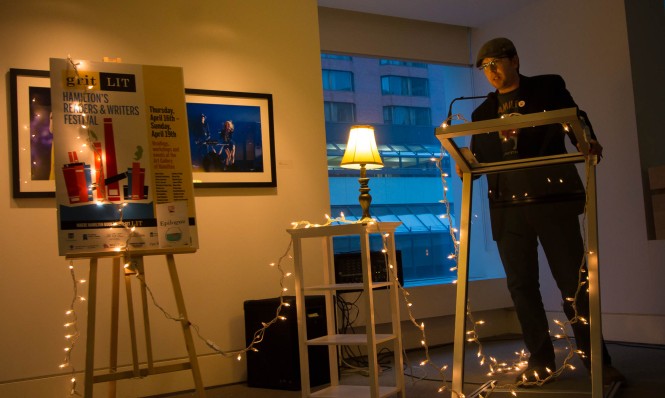 Martin Durkin was up next with some stories about getting to know what makes Hamilton such a cool place to live. This was Martin’s second time telling a story for us, and certainly not the last!

If you want to help Martin’s mission to make Hamilton famous, check out his book SteelTown for Mary, Memoirs From a Dick.

Krista Foss, writer and caffeine addict, was our third storyteller of the evening. She told a story from her childhood that involved feeding Fruit Loops to a toad and being chased around her house (not, as you might think, by the aforementioned toad…).

She showed us that ordinary people doing heroic acts can be breathtaking and made everyone hungry for cereal.

After a short intermission, Michael Derbecker stepped up to share a story and some would-be banking tips.

He shared a hilarious cautionary tale of miscommunication that resulted in an extremely expensive coffee break at one of Canada’s largest banks.

Andrew Amoah was the final speaker for Epilogue. He shared a story about his experiences putting together a Bob Marley cover band.

Andrew’s story taught us not to sell yourself short and remember that life is worth more than gold (… and that finding a Bob Marley sound-alike is not easy!).

Thanks again to everyone that made it such a successful night! Thank you especially to Chris White, Ariane Klassen, Dan Jelly and Matt Jelly of the Jelly Bros.

‘Epilogue’ was produced in partnership with Supercrawl Productions.