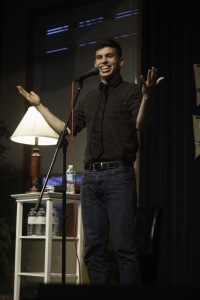 Zak McDonald is a stand up comedian, actor, provocateur, wordsmith, and modern day genius. He is also a man who refuses to write his own bio’s.

Zak has been traveling the country with his unique, honest, heartfelt and uplifting form of comedy for the last three years. He has been part of The Brantford Comedy festival, performed at The Lincoln Alexander Centre, and co-wrote and starred in the short film “The Store” for which he was nominated for best actor at The Hamilton Film Festival. He aims to continue to travel the world and push boundaries as a performer.

We are thrilled to have Zak as our host for ‘Some Assembly Required’!

‘Some Assembly Required’ is on Saturday, November 1st, at Mills Hardware. Doors open at 7pm and you can buy advance tickets for $10 here!