It’s coming up, folks: our 2-part storytelling showcase at Supercrawl! This weekend!

On Saturday, September 13th we’ll be at Mills Hardware, at 95 King Street East, from 1 – 4pm with speakers from 1 – 2 and 3 – 4. This is a free event! See below for more information on the four Hamiltonians who will be sharing their “Into the Wild” stories from 3 – 4pm! 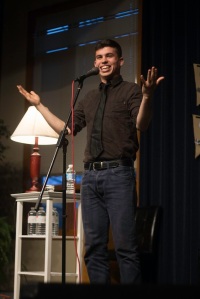 Zak McDonald is a stand up comedian. After a rough childhood he turned to stand up comedy as an outlet. Zak has shared his story across the country developing a strong local following. Zak’s comedy is a mix of his new-age lifestyle and his I-used-to-live-in-a-car past. He is known as a “spiritual journeyman” as he has spent time exploring every religion. Starting this September, Zak will spend eight months touring with non-profit charity Live Different, visiting high schools across Canada and inspiring students to pursue their dreams.

Chris Krucker farms in Copetown with his wife Denise and kids at ManoRun Farm. Chris graduated from McMaster with a philosophy/social work degree. He grew up working in his father’s pastry factory and realized that there must be more than machines, labourers and commuting. He thought that there must be people that knew how to make things and how things work. He also felt a strong call from the landscape that he commuted through each day from Burlington to Mississauga, and ManoRun Farm was born.

Born and raised on the Hamilton Mountain and currently living near Dundurn Castle, Katy is a huge believer in this great city of Hamilton. She completed her nursing degree at McMaster in 2010 and couldn’t get enough of the penniless student life, so she is back doing a Masters in Public Health at U of T. Nursing has provided many opportunities for Katy to meet many different kinds of people, and to be in situations that challenge and humble her.

Jeff Goodes is a proud dad and husband. When he’s not immersed in the chaos of his home life, Jeff works at CBC Radio as a producer and host. Currently, he is working on White Coat/Black Art with Brian Goldman, and as the host of CBC Radio’s Overnight. Jeff also produces and co-hosts the Scott Free Podcast with Scott Thompson of Kids in the Hall. He puts on 5×7 Talks: 5-minute talks by 7 people who have an idea to improve their community. Follow Jeff on twitter: @jeff_goodes